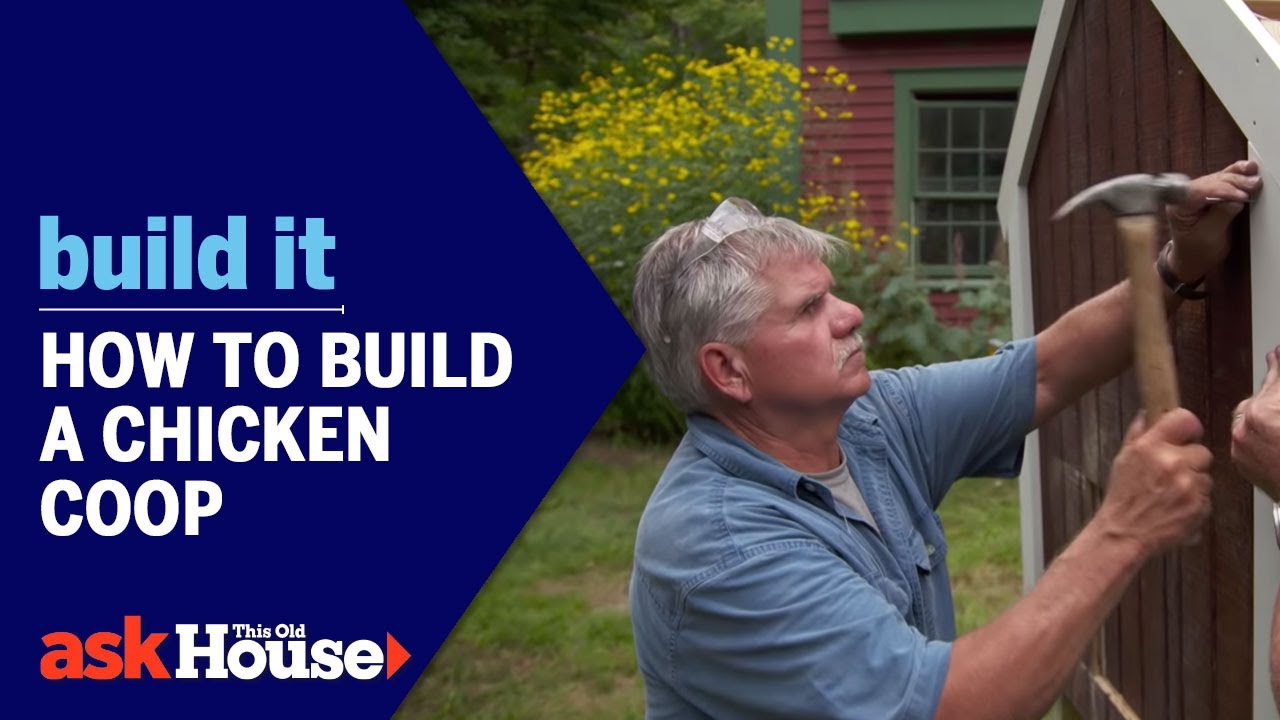 Steps for How to Build a Chicken Coop:
1. Stain the sheets of T1-11 and allow to dry.
2. Place two sheets of T1-11 on top of each other and ensure they‚Äôre even on all sides. Use a track saw to cut the roofline of the plywood at a 45-degree angle on both sheets at once.
3. Remove one sheet and then, using a jigsaw, cut a small square opening for the sliding coop door into a plywood sheet. For all the doors, the cutouts will later be reattached as the door.
4. On the next sheet, cut an opening for the small entrance door, using the jigsaw.
5. Cut a third sheet of T1-11 to form the side walls. On one of them, cut a large opening for the egg door, using a jigsaw. The other side wall will remain uncut.
6. Cut two of the 4×4 posts to the desired length, then match the angle of the roof using a miter saw for both steps.
7. Use a driver to drive in 1 5/8-inch ceramic screws to attach the posts to the plywood sheeting.
8. Use a piece of 2×4 at the bottom and the top of the coop to give it additional support. Attach these using ceramic screws, and fasten them using a driver.
9. Construct the opposite gable end, repeating the same steps.
10. Connect the two gable ends using 2x4s, and attach one of the side walls.
11. To form the rafters, screw in a 2×4 ridge beam and 2×4 purlins (parallel roof framing), using a driver and 3-inch ceramic screws.
12. Finish the framing by attaching additional 2x4s to the base of the front and back gable walls, using 3-inch ceramic screws.
13. Then, attach two more perpendicular 2×4 joists to form the floor support for the coop with 3-inch ceramic screws
14. To form the floor, use the _-inch exterior plywood and cut out the corners to match the posts using a jigsaw.
15. Fasten the plywood floor by driving 1 5/8-inch screws into the floor joists.
16. Attach the cutout door pieces to the plywood exterior sheets of the structure using hardware of your choice. Do this by driving provided screws into the hardware.
17. Attach the chicken door by threading a rope through a pulley at the top of the door. Then attach the rope to an eyelet on the chicken door. The other end of the rope should be linked to a hook at the opposite end. A track for the door can be made using scrap wood.
18. Attach the final side wall using 1 5/8-inch ceramic screws.
19. Build a nesting box to your desired dimensions using plywood and 2x4s.
20. Cut cellular PVC trim boards to match the angles of the coop, using a miter saw.
21. Attach the PVC trim boards to the exterior of the coop using a hammer and stainless-steel trim nails.
22. Attach _-inch plywood roof sheathing to the roof structure using a driver and 1 5/8-inch ceramic screws.
23. Lay down a layer of felt paper, and staple in place.
24. Using a hammer and roofing nails, attach the asphalt shingles with a 5-inch reveal to the roof sheathing.
25. Attach 4×4 posts of the coop to a beveled base using a driver and ceramic screws.
26. Attach the beveled base to a 2×12 square using a driver and ceramic screws to keep the coop from sinking into the ground.
27. Create a pen area using pressure-treated 2x4s to desired design. Connect the pen structure using driver and ceramic screws. Include an access door for cleaning the pen.
28. Cover the pen with chicken wire by hammering in construction staples.
29. Dig a trench in the outline of the pen at least 3 inches deep, and place the structure in the trench. This is meant to keep predators from crawling in underneath.
30. Attach the pen structure to the coop structure by driving in screws.
31. Place a piece of 2×12 from the coop door to the pen to serve as a ramp for the chickens.

About Ask This Old House TV:
Homeowners have a virtual truckload of questions for us on smaller projects, and we’re ready to answer. Ask This Old House solves the steady stream of home improvement problems faced by our viewers‚Äîand we make house calls! Ask This Old House features some familiar faces from This Old House, including Kevin O’Connor, general contractor Tom Silva, plumbing and heating expert Richard Trethewey, and landscape contractor Roger Cook.

How to Build a Chicken Coop | Build It | Ask This Old House
https://www.youtube.com/user/thisoldhouse/”